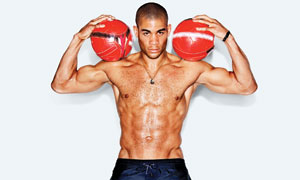 Shirtless Oguchi Onyewu is a soccer player for Milan of Italy’s Series A and the US national team.  His position is as a defender.  His first goal scored was in the 2005 Gold Cup.  Onyewu is the winner of the 2008 Belgian Super Cup and the U. S. Soccer Athlete of the Year in 2006.